Icons in Cardiology – Remembering Creative Minds and Their Discoveries 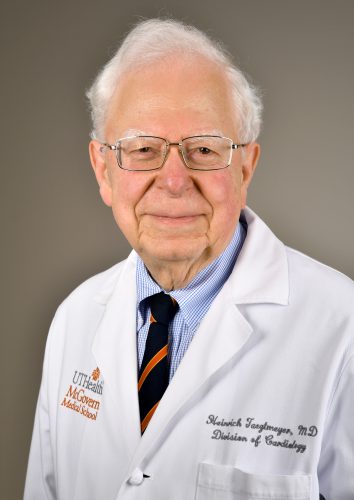 We recently had the opportunity to interview Dr. Heinrich Taegtmeyer, Professor of Medicine at McGovern Medical School, UTHealth, Houston. He is an Associate Editor of  Cardiology since 1993, serving under three different editors. In 2021, Drs. Taegtmeyer and Atar initiated the section “Icons in Cardiology”, to reflect on major discoveries by investigators whose work in the past paved the way for the future.

Can you tell us about yourself? How did you become interested in cardiology?

I grew up in Germany during and after WWII as a child of a middle-class family. My grandfather was a physician, my father had studied forestry. My father had a strong influence on my interest in nature. Later on, my love for the basic sciences was kindled by two outstanding teachers in medical school at the University of Freiburg, one was Albrecht Fleckenstein (Physiology), and the other was Helmut Holzer (Biochemistry). To keep us students awake, they laced their lectures with anecdotes. Equipped with their lantern slides and a blackboard, our professors taught us more than facts. They also shared with us some of their latest discoveries, from calcium antagonists to protect the heart, to mitochondrial respiration to produce ATP.

You describe yourself as a physician-scientist. Can you explain why?

In his book “Science and the Quiet Art” (1996), the late Oxford hematologist, Sir David Weatherall, draws attention to the tension between science and the art of caring for patients. This tension is pervasive in academic medicine.

As a physician-scientist, I aim to improve the care and quality of life of patients afflicted with cardiometabolic disease, which includes diabetes, dyslipidemia, hypertension, and heart failure. While scientists are supposed to work in the lab, caring for patients as a scientist is another challenge. From my time as a medical resident until 50 years later (2021), my clinic has always been on Monday mornings. This, of course, is sheer luck.  Since I entered medical school, I have considered it important to secure a solid clinical training before embarking on an equally solid training in research. In a way, the principles derived from basic research are directly applicable to treating patients. Witness the discovery of penicillin, of insulin, of adrenergic receptors to cite a few. One of those principles that arose from our work in the lab in recent years, is unloading the failing heart from metabolic stress. Witness also the success of bariatric surgery or the quiet revolution of gliflozins for the treatment of heart failure. I like the adage that today’s research becomes tomorrow’s principle in medical practice.

What challenges and developments do you foresee for the field of cardiac metabolism in the next few years?

A broad range of investigators in cardiac metabolism have prepared the ground for a paradigm shift in our understanding of heart disease, especially of heart failure. I would like to make three points. First, today we recognize that diabetes, heart disease, and cancer, all have deep roots in metabolism. In fact, metabolic remodeling precedes, initiates, and sustains functional and structural remodeling. Secondly, we also recognize the two branches of metabolism that crossover at many points: the catabolic branch, which generates ATP (an organic compound that provides energy) from the oxidative metabolism of fuels, and the anabolic branch, which makes and renews all the structural elements of the heart, and which uses ATP in this process.  Simply said:  The heart is a self-renewing engine which converts chemical energy into mechanical energy. A fascinating concept. Third, the current wave of obesity, type 2 diabetes, hypertension, and heart failure have made us all aware of metabolic stress as the main driver of premature death and disability from heart disease.

Many investigators today are taking a more holistic approach to cardiac metabolism. They have moved from a single molecule, like cholesterol, to much broader concepts, like unloading the heart from neurohumoral or metabolic stress- which I have already mentioned.

In short, we are living in exciting times, in which paradigm shifts are imminent. The question is: Are our minds prepared to see those paradigm shifts? As the famous biochemist Albert Szent-Györgyi (1893-1986) is supposed to have said: “Discovery means seeing what everyone sees and thinking what no one thinks”. This, I think, is the main reason for the “Icons in Cardiology” section.

In 2021 you have initiated the section “Icons in Cardiology” in the Cardiology. What led you to think of such a project?

The academic environment has changed considerably during the last 50 years. It is worth the effort to preserve the unity of research, patient care, and teaching, and this is one of the purposes of the “Icons in Cardiology” section.

Also, as mentioned before, I believe that learning from the minds and lives of the giants on whose shoulders we stand will help us identify those concepts which are of lasting value, avoiding reinventing the wheel on ‘re-discoveries’.

In cardiology, we are very fortunate to have had leaders with creative minds, like Rudolf Virchow and Sir William Osler in the 19th century, Einthoven, Langendorff, Forssmann in the 20th century, and all the “icons” whose ingenuity we plan to present in this new section.

Thinking beyond the cardiology subject field, what do you think is the role of medical history in current clinical research and practice?

In my postgraduate career, I had the good fortune to meet some of the exceptional scientists. A common trait among them was that they dared to be different at a critical time in their lives. To name a few, Hans Krebs, Hermann (Hugh) Blaschko, Richard Bing, and many others who were out of their jobs when the Nazis ascended to power in Germany. When they no longer felt welcome at home, they moved abroad and flourished in their careers in science. Another person who dared to be different was a surgical resident, Werner Forssmann, who performed the first cardiac catheterization on himself – and lost his job over it. “You can do those little tricks in a circus, but not in a respectable academic department”, the chairman said at his dismissal. Forty years later, this story was told to me by Dr. Max Fischbach in Boston who was present when it happened. Forssmann was awarded the Nobel Prize in Physiology in 1956, together with André  Cournand and Dickinson Richards. Another one of my heroes is Helen Taussig, who overcame many obstacles in her training and professional career as the world’s first pediatric cardiologist, and later on, led a successful campaign to stem the tide of thalidomide-induced birth defects – all by her own initiative.

By learning about the lives of ‘Icons’ we hope it may be possible to identify the traits that characterize the courage of ‘great minds’ and use this knowledge when searching for a great mentor.

Thank you very much for this interesting interview!

Check out Prof. Taegtmeyer’s tips on how to succeed in academia.