Experience KargerHow We WorkOne for all. An Honorary Doctorate for Gabriella Karger – and the Karger Publishers Team

One for all. An Honorary Doctorate for Gabriella Karger – and the Karger Publishers Team 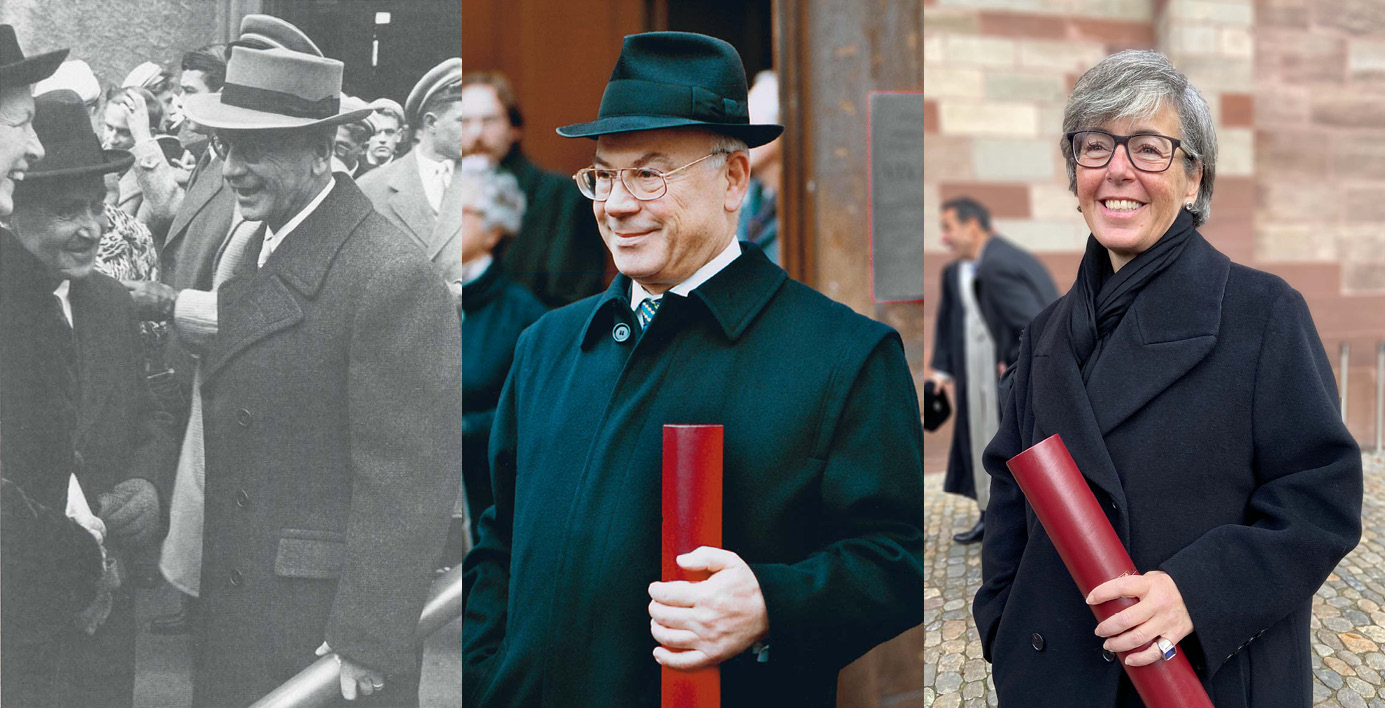 This November the University of Basel awarded Gabriella Karger, Chairwoman of the Board of Directors at Karger Publishers, an honorary doctoral degree. Gabriella Karger thereby joined a family tradition: both her grandfather and her father were also given this honor. In an interview Gabriella spoke about what this honorary degree means to her and why she would like to share the credit. 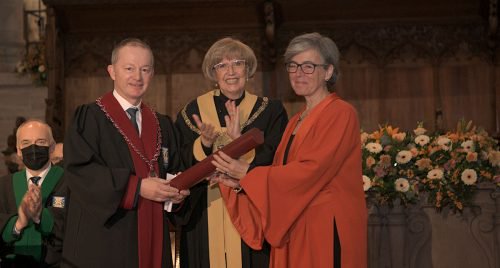 Congratulations, Gabriella, on receiving your honorary degree from the Faculty of Medicine of the University of Basel. What was your first thought when you heard the news?

“Wow, that’s great! What an honor! That’s wonderful.” But since I’m a modest Basler as well it was also a little embarrassing. I was just doing my job. But of course I was overjoyed about it, especially for the publishing house. The distinction shows how much we all accomplish together, the Karger team.

What does an honorary degree mean to you?

This distinction is something very special to me. The Faculty of Medicine at the University of Basel has a very good reputation. Being honored by Basel means that I was able to carry this good reputation of my hometown, and of the seat of this publishing house, out into the wider world, and that I can continue to do so.

Moreover I see myself as the representative of my generation, which is why I would like to dedicate this honor to the memory of my brother Steven, who led this business until he passed far too young.

Why were you given this honorary degree?

From the activities that were listed by Professor Schär, the dean of the medical faculty, in his Laudatio address, I would emphasize two of them: the support of young researchers, and scientific communication.

We support the development of young researchers at the University of Basel by taking part in the annual science month of the Faculty of Medicine for over ten years now . Moreover it will soon be twenty years now that we’ve been involved with the Faculty of Psychology in funding the Steven Karger Prize for the best dissertations.

Internationally, we began in 2020 by establishing the Vesalius Innovation Award focusing on startups in the health sciences and scientific publishing.

And what were the reasons for the honorary degree involving scientific communication?

We published the masterpiece of the anatomist Andreas Vesalius in an English translation; that was something special and unique for me. Vesalius wrote medical history more than 500 years ago with his atlas “De Humani Corporis Fabrica” and is rightly called the father of anatomy. The English translation of his oeuvre is important for an understanding of all of medicine — both historically as well as for the future.

For this reason I have also pushed for the digitalization of all Karger publications, so that now practically every text we publish is available online — medicine can also learn a lot from history.

With our efforts in the domain of open science we are taking our traditional role of making medical content as broadly available as possible into the future. We would like to make new scientific findings openly accessible in order to advance the health sciences. Here a sustainable transformation is important to us to ensure that the interests of all our stakeholders are still upheld.

All of these projects are planned and implemented together with many other Karger employees. Is the honorary degree a distinction for the entire Karger company?

Yes, absolutely. We all live the idea of “Connecting and Advancing Health Sciences”. This is not the achievement of any individual. For this reason I accept this distinction as the bearer of the Karger name for all who help to carry Karger. For me as an entrepreneur it is very clear that this distinction was earned by many people together. Besides the staff of Karger Publishers I also share this distionction with my family, who have supported me and us as a family business in everything.

What does the company mean for your family?

Very much! We all agree that we absolutely wish to continue this business. Of course none of us know how the industry will change and what challenges we will face. It is important that the family shares an engagement, interest and understanding for the company.

Your grandfather, Heinz Karger, and also your father Thomas were both given the honorary doctorate. How was that at the time?

I can remember very well when my father received the honorary degree in 1993. It meant a lot to him, because he had to take over the company as a 29-year-old after the sudden death of his father. It was a validation of his work, for him, also because Basel and the close contact with the university were particularly important to him. Unfortunately he can no longer see the ceremony this year. He certainly would have been more than proud to see me also received the same distinction.

What does this distinction mean for Karger as a publisher?

It is a confirmation that Karger Publishers is pursuing the right strategy. Like those before me, we offer an important platform for the exchange between scientists by publishing their research following its assessment by their peers. But research is never finished, especially if it fails to look at the bigger picture. The clarification of the research for the clinical and practical context has to be ensured as well as conversely informing researchers of the feedback from patients and doctors. The Karger publishing house has a rich history and I’m happy to continue writing this history together with my family, with all the Karger staff, and with our important partners in the sciences, in industry and in publishing.

A Day in the Life of the Head of Digital Landscape

Get to know a typical work day of our Head of Digital Landscape: Adrian Harper. Learn about his “Getting Things... 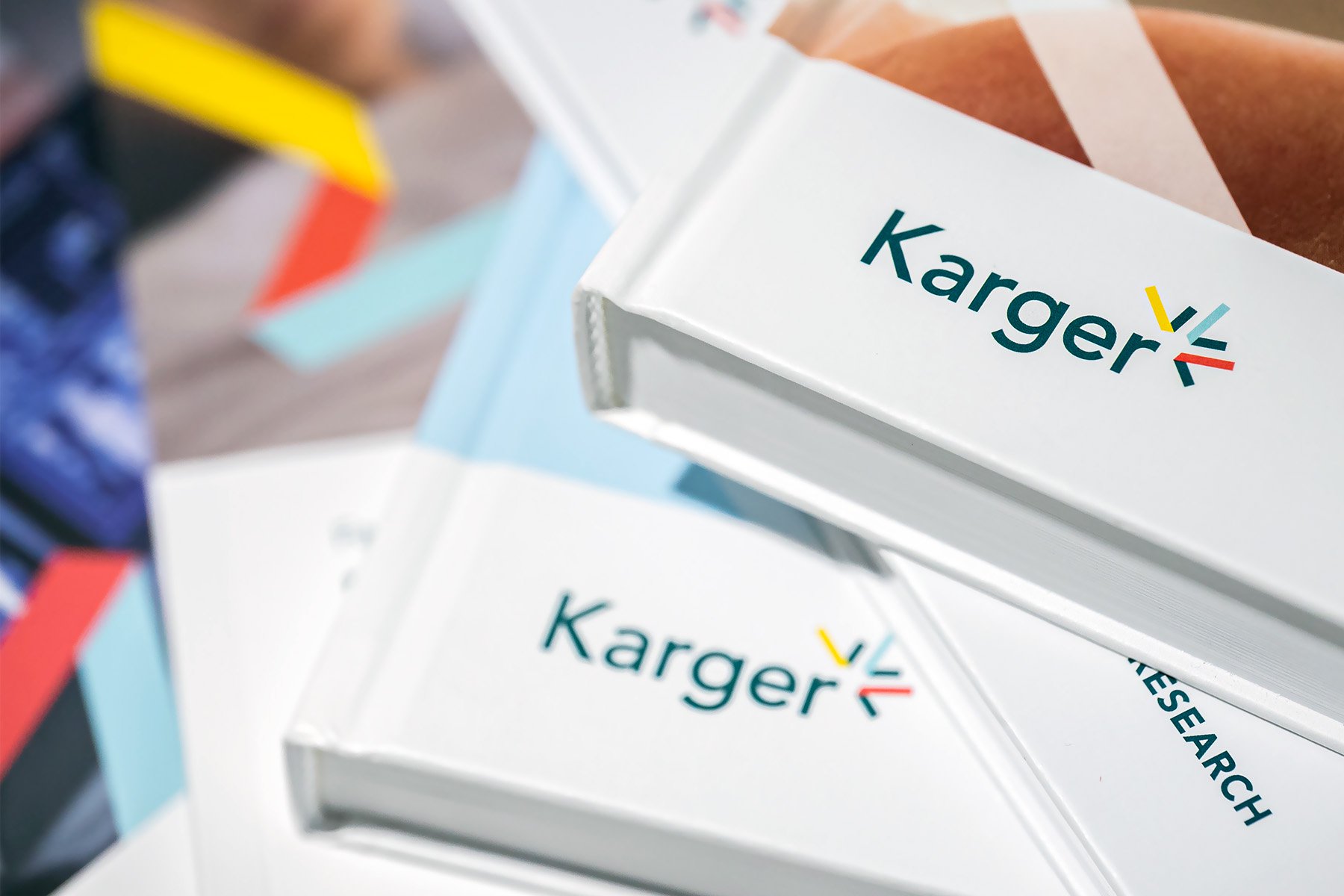 Karger Publishers’ first publication appeared in book form, the "Geburtshülfliche Vademecum" (a handbook for obstetricians) from the beginning of the...

What is it like to work in two roles at the same time? Samuel Lei, Executive Assistant of CPM and...